The Technology Singularity: How Tech Is Growing “Too Fast”

Home/News, Technology/The Technology Singularity: How Tech Is Growing “Too Fast”
Previous Next

The Technology Singularity: How Tech Is Growing “Too Fast”

One of the scary things about black holes is that they have a “singularity.” The singularity in terms of a black hole is the point at which even light can’t escape the gravitational pull.

This is a bit freaky to scientists because we can’t know what happens to the black hole. Is a portal to another dimension opened, or is reality being crushed completely?

Because we can’t see past the singularity, we can only guess.

You must be wondering: what does technology have to do with black holes?

Like the pull of a black hole, technology is developing exponentially. It is not increasing by a set frequency every year. Instead the rate of which technology is improving is growing. Here’s a graph to illustrate it for you: 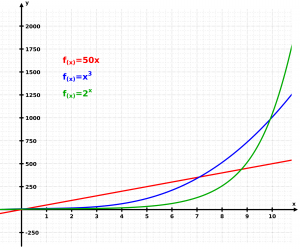 The green line is growing exponentially. With each number forward the line is jumping up significantly further than the red line could ever keep up with.

This brings us back to black holes. The gravitational pull acts like the green line on the graph in that the pull becomes stronger and stronger until even light can’t escape!

Do you see where this is going?

Humans Won’t Be Able To Keep Up!

Assuming we don’t destroy ourselves and all of our progress, humanity will simply not be able to keep up with all of the progress that is happening with technology.

Our brains are like the red lines, whereas the rate of improvement is like the green line. Eventually we will reach a point where we can no longer understand what is happening with technology.

This day will be known as the “technological singularity.” It will from that day forward be impossible for any human to really grasp what is happening with technology; the growth will happen on its own.

How Is This Happening?

You might be wondering: but isn’t technology created by humans? You’re right, we made it, but the thing is we’re making things smarter than us.

Take your calculator for example. It can likely calculate some fairly complex things with 100% accuracy and faster than you ever could.

You see we are developing technology that learns & upgrades itself.

For example a program is written to write other programs, then figure out how to upgrade itself, then upgrade that, so on and so forth. The technology will essentially take on a life of its own!

It is much more efficient to develop technology that “learns” than try code it perfectly the first time. You could keep computing & programming for weeks, or you could just write a program that says “figure out how to solve the problem yourself.”

We have done that with technology. Our tech is upgrading itself and soon it will reach a rate of growth faster than what we will be able to comprehend.

What Does This Mean For Us?

That’s the thing. It is virtually impossible to predict what will happen when we cross into the technological singularity because we will have lost touch with our creations. They will “take on a life of their own.”

Like a black hole, there are endless possibilities to what could happen, but we can’t know until we actually cross that threshold.

It’s possible we could accidentally nuke ourselves, or that we end up with world peace for all humans, animals, and even the Earth itself (see: no more pollution somehow).

So far we have developed in an exponential path. Not long after creating computers we ended up on the moon, and not long after that everyone ended up with a smartphone.

Who knows what could happen in the next year, 5 years, 10 years, or even one hundred years. We can only guess and let our imaginations run wild.

One thing is certain and that’s that as a civilization we will cease to be “just human.” We will have created a technological beast that may help us or hurt us for it will be developing too fast for any one person to understand.

All we can do is help for the best.

What do you think will happen in the technological singularity?