Guide to the Best Wireless HDMI Transmitter and Receiver

Home/News, Wireless/Guide to the Best Wireless HDMI Transmitter and Receiver
Previous Next

Guide to the Best Wireless HDMI Transmitter and Receiver

Rewarding things are often challenging. Going wireless is no different. Compared to running an HDMI cable over a great distance, running a wireless signal might seem like it’s easy by comparison. But there are almost always special challenges to running a proper wireless setup. So, if you want to avoid issues with your connectivity, you’ll want to read this article. And for this reason, we offer a guide to the best wireless HDMI transmitter and receiver.

Transmitters and receivers tend to run hot, especially the transmitter. It’s useful to look for designs which are good at dissipating heat, which typically means either ABS plastic or aluminum.

The thermal conductivity of aluminum is slightly better, especially when paired with proper venting holes. It doesn’t hurt that it looks great, either. Though you don’t need to become too concerned with heating unless you’re trying to operate the transmitter/receiver in 90-degree environments on a continuous basis.

Another thing you might look for on the transmitter/receiver are swappable antennas. In most cases, you won’t need to swap the antennas. But it doesn’t hurt to have the option, and in the scenario that one of your antennas becomes damaged or disabled, being able to swap in a new one is much better than having to purchase a totally new transmitter/receiver.

Good wireless HDMI transmitters should be as easy to use as plugging in a USB drive. In reality, they’re often somewhat more complicated because you have to think about the precise location you want to position each unit. But beyond that, any good setup won’t require you to have to deal with special driver or software installation.

You will also have to think about how to run power to the transmitter and receiver. But any good wireless HDMI transmitter kit will provide you with options to make that easier.

When you’re trying to get the transmitter and receiver to stay in line of sight, it helps if you can move them around a bit. Sometimes a HDMI transmitter/receiver kit will provide extension cables and similar accessories. This can make it a bit easier to form a stable connection.

Kits that don’t provide these kinds of extras aren’t necessarily bad. Consequently, it’s usually possible to pick up your own extension accessories as needed. However, there’s something to be said for having everything included with your kit. Even when it comes to something as superficial as cable ties, a few extra can go a long way towards making everything run smoother.

The Diamond VS300M is a kit that includes one transmitter and one receiver, both units looking nearly identical. It offers a wireless range of 150ft, which still provide enough for most people in most circumstances.

Of course, line of sight will affect those distances. If you’re trying to transmit through walls, you might find that 150ft quickly cuts down to 40ft. It also depends on the density of the wall. An insulated wall is almost as bad as trying to move a signal through brick.

Each transmitter/receiver measures roughly 5.1 x 3.1 x 6.6-inches. That enormous 6” height is due to the antennas, which can be lowered slightly depending on the angle at which you adjust it. These otherwise slim and portable units can be made sensationally tall by the included antennas. 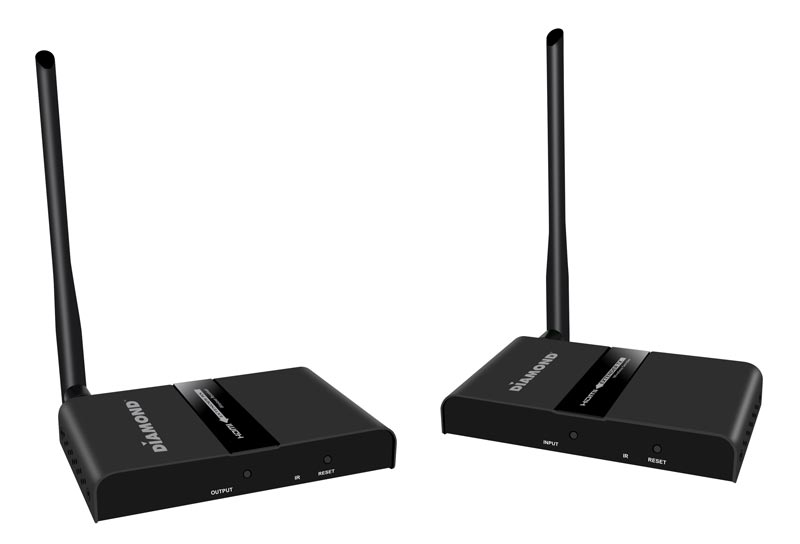 It’s also worth noting that these antennas can be removed. That can be useful for some types of applied installations, or for eventually swapping them out. 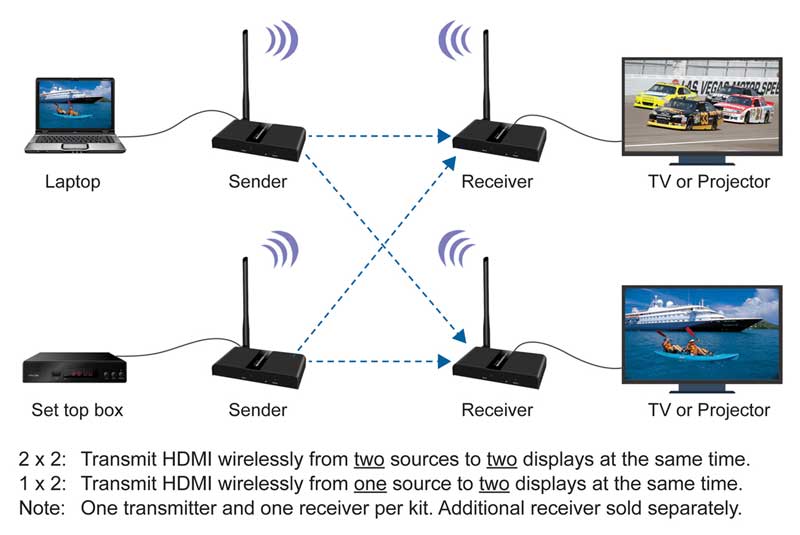 The VS300M also has a range of expandability as well. Probably most noteworthy is that the VS300M can transmit from one sender to two separate receivers, though only a single receiver is included.

You can pick up an extra receiver without having to buy another complete kit, which is pretty nice if you plan on running dual displays at some point.

Finally, the Diamond VS300M is the right choice for someone who doesn’t need an insanely long broadcast signal. It can run about 150ft, which should be suitable for most people in most circumstances. Setup is fairly simple and the antennas are swappable. The price isn’t particularly competitive. It’s closer to average in terms of the dollar per performance ratio and the equipment is solid.

You can find more info on this article on nerdtechy.com.